What Is More To Life?

More To Life is a global educational non-profit devoted to fostering personal and social transformations through immersive learning experiences that awaken individuals to their own unique power, purpose, and potential.

Each course provides reality-based tools designed to activate and support your ongoing evolution and deepen your ability to respond to the unexpected moments and unwanted curve balls that come your way – what we refer to as Lifeshocks.

These are the tools to have for life, to help change your life.

How it all began 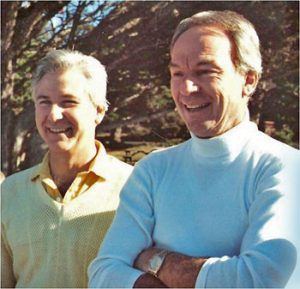 e in San Jose, California. Within a few years the program had extended into new locations in the United States, as well as South Africa, New Zealand, and the United Kingdom – and its growth continues today.

More To Life courses have been brought into corporations and government agencies on four continents, as well as offered through educational institutions, with a number of courses CPD (Continuing Professional Development) certified, in many fields.  Our partner organisations have included penal institutions, domestic violence shelters and national leadership programmes, from the Mandela-Rhodes Foundation in South Africa to The Prince’s Trust in the UK.

Over thirty years later, More To Life continues to bring its passion, skill, and vision of a world of individuals living their highest purpose and humanity. But how did it all come to be?

Dr K Bradford Brown, Ph.D. and Dr W. Roy Whitten, Ph.D. created More To Life as a way to offer others the skills and practices they developed through their work in psychotherapy and counselling.

Dr Brown first became interested in the connection between social, spiritual and psychological development as a young priest in California in the 1950s.  He was active in the early days of the civil rights movement, before leaving the US to briefly become a visiting fellow in adult education at Oxford University.

Brad continued these themes when he began his studies in psychology. As a psychologist and then a practising psychotherapist, he worked with some of the other pioneering therapists of his time, including Victor Frankl and Alan Watts, a well-known writer and teacher of Buddhist practice who played a key role in the introduction of Eastern thought to Western culture. Brad and his wife Dr Anne Brown, also a psychotherapist, founded the Institute for Family and Human Relations in Los Gatos in the 1970’s.

Dr Roy Whitten also served as a priest in the Episcopal Church and the two men met when Brad was asked to give a guest sermon at Roy’s church. Soon after, Roy became a Family Pastoral Counsellor working with Brad and other psychologists at the Institute.

Brad Brown died in August 2007 at the age of 76 from complications of Parkinson’s disease. The vision he developed with Roy lives on, through the unique and powerful work they shared with the world.